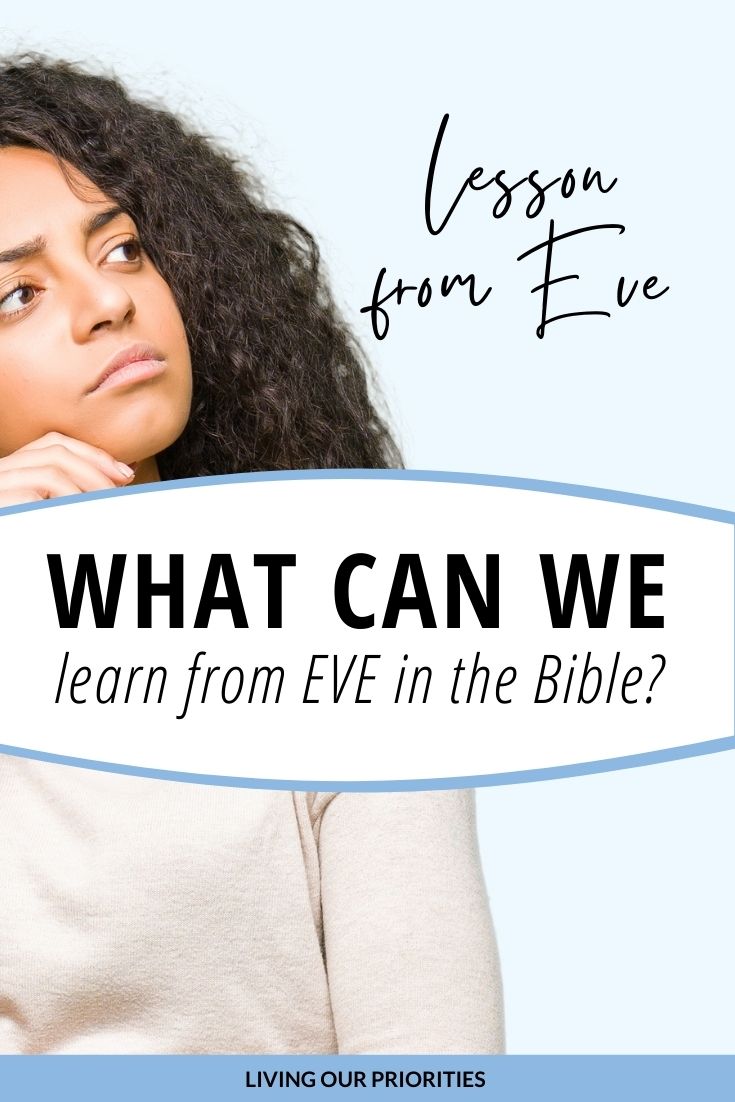 What can we learn from Eve in the Bible when we’re living in a time with a rise of independent women; while some men are sitting back letting women take over?

We’re living in a time where children are being raised without fathers, and some men haven’t taken their rightful place in their homes. Are they to blame? Some may say yes, but I challenge the women to consider their part.

Eve In The Bible

The best place for us to consider our part as women, is to start from the very beginning, not just with Eve but with God’s instruction.

In Genesis 1:26, we read about God creating man in His own image.

Then in Genesis 2:7, we read about God creating man from dust.

Skip over to Genesis 2:16, we read of God giving man instructions; to not eat the fruit from the tree of knowledge.

Notice, the word “man” was used in these three different verses. But do you know the difference of their meaning?

Well, here at Living Our Priorities, we encourage the importance of understanding context of scripture. So let’s take a closer look at the word man used.

When looking at the Hebrew word for man in Genesis 1:26 the word is spelled: ’ā-ḏām. While the word origin stems from Adam, it’s referring to mankind: men and women collectively or you can say human beings.

When looking at the Hebrew word for man in Genesis 2:7 the word is spelled: hā-’ā-ḏām.

In Genesis 2:16 the same Hebrew word for man in Genesis 2:7, is used also here in verse 16. Which means God gave man (Adam), instructions not to eat the fruit of the tree, NOT Eve.

Eve Wasn’t The Only One

We all know the story, that Eve ate the fruit and handed it to her husband. In modern terms, Adam followed Eve’s lead; even though God told him not to.  Later on in Genesis 3, we read how God held each of them responsible for the role they played. Eve was punished for leading her husband astray. And Adam was punished for following her lead.

Eve isn’t the only woman in the Bible who enticed her husband or a man to do what she wanted that ended with consequences.

Lesson Learned From Eve In The Bible

As women, we are beautiful. We come in all shapes, sizes, and colors, because we are all fearfully and wonderfully made! However, we cannot use what God gave us as a weapon to tear down our men, or entice them to do what we want.

If I can be honest, instead of pointing out that we’re in the mess we’re in because of Adam and Eve, it might a better observation to understand the role each of them played and discern how we can avoid those same mistakes.

Its’ not only time for our men to take their rightful place; it’s time for us ladies to let our men be men and step aside.

I’m not talking about neglecting what God has given you to do, but through prayer and taking our rightful place in the spirit, as a result we’ll begin to see our men elevate to the place God has called them to be.