Who isn’t an independent women these days? Seriously, as women, we are killin’ it; educated, earning a living, buying homes, raising families, and many times all on our own. However, in all the independence, there are 3 biblical truths for single mothers to hold onto!

Let’s face it, we’re living in a time where there are some men who don’t man up and take the responsibility to raise their children. Divorce rates are higher than ever before. And unfortunately, widows who have been left behind with a family to raise on their own.

Despite all of this, guess what? God is noticing!  And if you’re a single mother, don’t think for one moment that God has forgotten you. 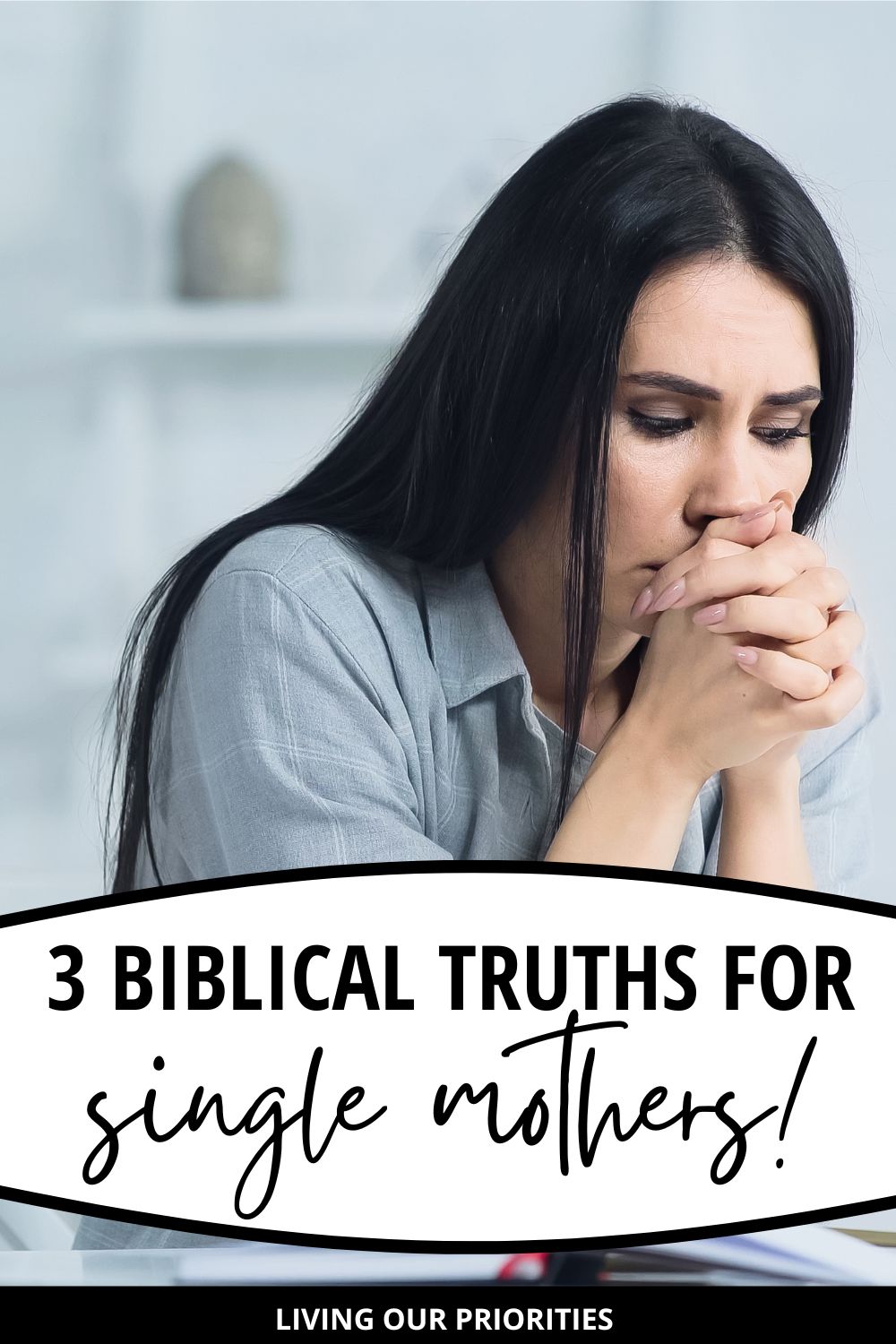 In fact, it’s just the opposite. God has so much love, and compassion for you; that through Jesus Christ, He has given you everything you need to raise your family with nothing missing and nothing lacking!

If you don’t know our story, we’re a blended family, and before I met Andre I was a single mom with my son Brandon. I was only 22 at the time, and I remember falling to my knees and asking God to help me.

As a young single mom, I had no idea what I was doing. How I was going to raise a son, pay my bills, including daycare on my little salary. During that time I was living a lukewarm Christian life, but I was desperately seeking God for his help.

That’s when I came to know three biblical truths that was going to help me as a single mother.

I learned to seek God for His Wisdom, the importance of a balanced scheduled, and to rely on His provision, not my own.

Being a single mom requires a lot of wisdom. I found myself seeking God for when to say no to the good for the sake of the better; when to slow down, and when to take care of myself.  Many times I had to make decisions on the fly, and the pressure of making those decisions by myself weighed down on me.

That’s when James 1:5 became my life scripture during those years because daily I was asking God for guidance; whether or not to take a promotion at work, whether or not to date. The truth was; I was really afraid of making another mistake and every night I would cry myself to sleep asking God to help me.

“If any of you is deficient in wisdom, let him ask of the giving God [Who gives] to everyone liberally and ungrudgingly, without reproaching or faultfinding, and it will be given him.”~ James 1:5 (AMPC)

Since I worked full time, I remember the guilt I felt everyday dropping my son off at daycare for almost 12 hours. When we were together at night, I had to learn to make whatever little time I had with Brandon quality time. The reality was, that was all I was capable of doing.

Seriously, I lived paycheck to paycheck, and had very little left over for entertainment. So I had to get creative with our activities to make our quality time fun, and memorable.

To this day, Brandon often asks me: “mom do you remember when it was just you and me, and we use to go to the movies or get juicy chicken?” Mind you, the movies he was referring to was an old theater we used to go to. Where movies were $1 because they were movies that came out a long time ago.

Brandon is 27 now and the fact that the little things I did is what he remembers most, means that I had succeeded at creating memories with the little I had. And I did that by balancing my schedule and prioritizing my time with him when I wasn’t working.

Quality time with your children will always trump quantity time when done right. I know plenty of families who are together all the time. However, they are distracted by work, electronics, and their own busyness. They don’t even spend time with each other because they’re too busy with themselves.

Just because you’re single doesn’t mean your primary focus has to be work. Your first ministry begins at home, and when we live a balanced life, God will see to it that we have everything we need.

“A false balance is abomination to the Lord: but a just weight is his delight.” ~ Proverbs 11:1 (KJV)

Being a single parent often means living on one income. I was living paycheck to paycheck, and I wondered how I was going to provide for my son.

Being in that position motivated me to not just pray for God’s provision. I wanted His wisdom, directing me to the right information or resources that would help me manage what I had. As this would be a far better use of my time, instead of focusing on what I didn’t have.

When thinking about relying on God for finances as a single mother, I often think of the story in the Bible about the widow, and Elijah ( 1 Kings 17:7-24). I think about how Elijah saw her at the well and asked her to make him a cake. She said all she had was enough for her and her son. However, she did it anyway, and God made sure she had enough.

It was hard for me to trust God with my finances when I was already feeling like I barely made enough. Did I really tithe 10%? No. I did what I could until I grew enough in my faith and learned how to manage my finances to point where I was able to tithe.

Since I worked at the bank, I realized I needed to learn everything I could and actually apply it to my life. Have you ever met a manicurist whose nails looked horrible? Or what about, a hair dresser whose hair was a hot mess? Well, I didn’t want to work at the bank and have no financial knowledge, so that’s when everything changed for me.

I learned how to balance my checkbook, start a savings account even if it was a small amount. Over time, I learned the importance of credit and how to build it and eventually bought a home.

To be honest, it wasn’t easy. It was difficult, because I started out with the wrong attitude. I was thinking; what’s the point in learning how to manage money when I don’t have any. And that is when Luke 16:10 became real to me.

As I started to make little changes, my faith grew. As a result, I started to give on the very little I had. Before I knew it, Brandon and I were living very comfortably on one income.

However, you don’t have to do it on your own. My best advice is to cling on to God, and seek His wisdom, a balanced scheduled, and His provision. As difficult as it may be, there is nothing too difficult for our God. He will give you everything you need so that you will have nothing missing and nothing lacking.

PS… One of the first books I read was; The Courage To Be Rich by Suze Orman. It took a lot of courage to be honest about my financial situation. It wasn’t a Christian book, but I learned a great deal from it. Over the years, my library of financial resources grew as I grew in this area. Especially when I learned of Kingdom financial principles. In fact, Becoming a Millionaire God’s Way, and Simple Money Rich Life are two of my favorite Christian-based financial books.

Do you have another biblical truth that can help single mothers? Please share in the comments.